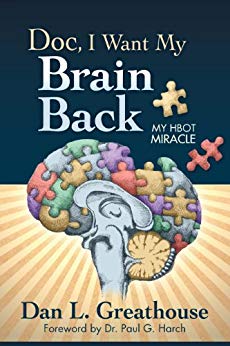 Doc, I Want My Brain Back is the compelling true story about a scuba diver who suffered a brain injury and was misdiagnosed by well over thirty medical professionals before receiving successful treatment. After being jailed and committed to the state mental hospital, the diver’s parents intervened and made provisions for him to be transferred to another mental hospital, where he was improperly drugged with pharmaceutical psychotropic medications.
Meanwhile, most of his friends and family “wrote him off” as merely another mental case; however, his father researched delayed hyperbaric oxygen treatments, well outside of the prescribed limitations and found supporting evidence for a therapy that Dr. Paul G. Harch had successfully applied to another diver.
Unlike any other brain injury rehabilitation book, Doc, I Want My Brain Back chronicles the events of Dan Greathouse’s life that led Dr. Harch to discover the tip of the iceberg for neurorehabilitation. With this successful case in brain injury repair, Hyperbaric oxygen therapy takes its place in medical history. Doc, I Want My Brain Back is the story of a medical breakthrough written from the patient’s perspective.